MENUMASTER is, together with AMANA COMMERCIAL, a  brand of ACP Inc in Cedar Rapids, Iowa. It is a world leader in commercial microwave ovens. It belongs to the international ALI group of companies specialized in the catering and food production industry. 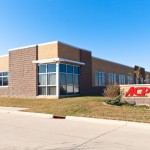 ELIONA is a company of the Belgian Van Assche group in Vilvoorde, Brussels. The family has been distributing AMANA microwave ovens since 1969. First, during the pioneering years, only in Belgium. From 1979 on in France and since then in many European countries.

De current microwave ovens was the distant result of Anglo-American collaboration at the beginning of the second world war. De heart of the product, the magnetron, had been developed by British engineers and scientists when they built a RADAR early warning system around the British coasts. As a tradeoff for military collaboration, de RADAR Magnetron was brought to the US in order to have it miniaturized and built into airplanes on a massive scale. This was achieved by an American engineer, Percy Spencer, who worked for Collins Radio and later for RAYTHEON in Boston. In 1947 he had discovered that the microwaves generated by the magnetrons could be used to heat food. By 1954 he had developed the first commercial RADARANGE.

In 1967 Raytheon made the acquisition of the Iowa appliance manufacturer, Amana Refrigeration. Together their engineering teams developed the first portable microwave oven: the AMANA RADARANGE.

The VAN ASSCHE family brought one of the first RADARANGES to Europe and launched the product into their distribution network. The AMANA microwave ovens were distributed until 2012 alongside the prestigious AMANA Side by Side refrigerators. 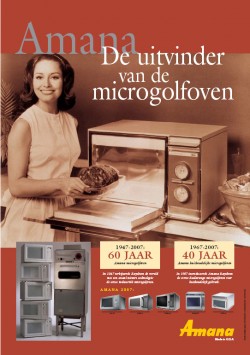 As a result of many fusions in the US appliance market, the Amana refrigerators became part of the Whirlpool group and the microwave ovens of the ALI group. In 2012 Whirlpool decided to stop the production of US refrigerators for the EU market: the growing deviation of European and American environmental standards had made production of US refrigerators for the European market unprofitable. ACP decided to continue the AMANA Commercial brand for the microwave ovens only in the North American market, and concentrate on the MENUMASTER brand overseas. The MENUMASTER brand  had become part of Raytheon in the 90’s. For many years MENUMASTER had belonged to the LITTON group and had been the major competitor of Amana. With this acquisition Amana acquired also the first combination oven with microwaves and convection for the professional market.

Since march 1 2012 the MENUMASTER ovens, as produced by AMANA at ACP Inc are distributed by the commercial division of the VAN ASSCHE group: ELIONA NV, as a second division alongside the WINTERHALTER commercial dishwasher division.